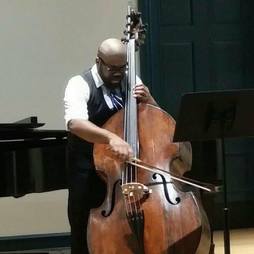 Brandon Harris is a bassist from Baltimore City with his fingers in many pies!  He has been teaching and performing in the Baltimore-Washington Metropolitan Area since 2010.  Brandon has performed with such ensembles as the Richmond Symphony, the Roanoke Symphony, the American Festival Pops Orchestra, and the Tyson's McLean Orchestra where he is principal bass.  In addition to performing with these ensembles, he also performs musicals regularly with Montgomery College's Summer Dinner Theatre, has performed at Creative Cauldron in Falls Church, VA, and has led music panels at the Music and Gaming Festival (MAGFest) where he has also performed.
Brandon received his B.M. from George Mason University where he studied with Glenn Dewey of "The President's Own" Marine Band, his M.M. from The Catholic University of America where he studied with Ira Gold of the National Symphony Orchestra, and his G.P.D. from the Peabody Institute where he studied with Paul Johnson.  He maintains a private studio and has been with Bass Works since 2015.​